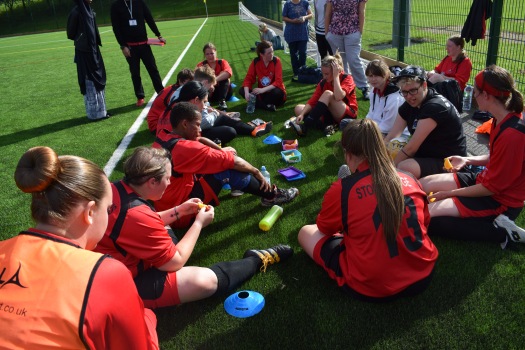 Written by Jane Watkinson, Co-Founder and Co-Captain of AFC Unity

It’s become a long-running joke (not that funny, I know) that this is the season where the ‘injury curse’ hit our first team. It seems nearly every week we have suffered a new injury blow. Beth broke her collar bone, Rachel pulled her hamstring, Becky injured her thigh, Steph injured her knee, Lisa twisted her ankle. I myself have just been diagnosed with a chronic ruptured ACL knee ligament.

As a club, since the start we have been very keen to involve injured players in different ways whilst they’re recovering. When injured your instinct is to isolate yourself so you don’t have to see other people doing something you want to do so much but can’t – this is especially the case with long-term injuries. But it’s really important that when you’re injured you try and not do that, as being involved in a different way still means you are part of that collective spirit, you can still learn by listening and watching at training, you can still cheer your team mates on and help with positive encouragement and you still get to develop a bond with your team mates ready for when you return. Yes, it can be painful, but strength and character can develop through pain too.

Playing football is a big part of my identity now and when you get injured it’s difficult not to feel slightly lost. I am fortunate in that co-founding the club and in having the off-the-pitch role – Secretary and a Director – I do in the club I have no choice but to keep very much involved and I wouldn’t have it any other way. It was difficult at the start but the more I have embraced this it has helped me deal with and process the injury. Jay Baker, the Manager of the first team, has got me involved with helping out in a coaching capacity with the first team, whilst I still coach at the Solidarity Soccer sessions.

We have found this has happened with other injured players too. In the first season, Olivia Murray injured her ACL for the second time whilst playing for us in a friendly against Sheffield Wednesday Development after just coming back from ACL injury. Olivia became involved as a first team coach and as the Chair of AFC Unity’s Board of Directors being absolutely fundamental to the development and growth of the organisation. Olivia has spoken about how important this was for her getting through a very understandably difficult time.

The same goes for Emily Salvin who sustained serious knee damage in Sarah Richard’s testimonial match. Emily is now recovering from her recent surgery but during her time out has been the AFC Unity Jets head coach and has been absolutely fundamental to helping create a positive vibe and ensuring a well organised set-up. Emily has also spoken about how the experience has helped the injury recovery go faster with her able to focus her passion for football in a different way. I personally have been so impressed and inspired by how Emily has coped with and responded to the process.

We have provided injured players opportunities to get involved in non-coaching roles too, such as Eliah Ward becoming our Community Outreach volunteer whilst recovering from back surgery, which included helping with the Football for Food campaign expansion and talking at Diversity Festival.

It’s really important that players who sustain injuries are kept involved if they are wanting to. Obviously some players deal with it differently and don’t want to be in a footballing environment whilst injured, but we make sure everyone knows there is something for them whilst injured.

Us injured players even talked about setting up a 5-a-side team it was getting that silly – there has sometimes been a bench of us at games and training but taking a positive from this that also has helped knowing that others are there to pick you up when you’re having a low day and that you can help provide support to your team mates who are also injured whilst cheering those on the pitch. Myself and goalkeeper Steph have had a “knee pact” where we keep each other in check and make sure we don’t do anything we shouldn’t be doing to harm recovery! That has helped me a lot and I am really thankful to Steph for that.

It has been a very difficult season for injuries – we have lost the best goalkeeper I have ever seen in women’s football, we’ve lost players that boss the spine of the pitch and it’s definitely made things a lot harder. I honestly have never known anything like this in terms of luck whilst playing football but these things happen.

Players are returning though as the season goes on and we are aware that there is a long-term plan for the club and also the club is a lot more than what happens on a Sunday. The spirit of Unity, solidarity and empowerment happens off and on the pitch and whether you are playing or injured.